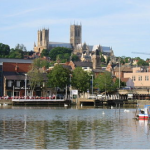 The Brayford Pool is a natural lake formed from a widening of the River Witham in the centre of the city of Lincoln in England. It was used as a port by the Romans - who connected it to the River Trent by constructing the Foss Dyke - and has a long industrial heritage.

Today, the waterfront surrounding the pool is home to a range of hotels, restaurants, bars, entertainment venues and a modern University (University of Lincoln). There is also a year-long programme of events on the waterfront including vehicle displays, music evenings and carnival parades

Brayford Pool in Lincoln, where the Foss Dyke meets the River Witham

The Fossdyke Navigation passes through mostly rural surroundings until it reaches Lincoln. The flat landscape affords spectacular views of sunrise and sunset, though these may be curtailed in places by embankments. From the canal, you can see the magnificent gothic Lincoln Cathedral and the dramatic battlements of the castle.

Walkers and cyclists can explore this rural navigation via the Fossdyke Canal Trail, which joins the National Cycle Route 64 shortly after Burton Waters.

Brayford Pool is a great destination for a family day out. Lincoln Castle and Cathedral are accessed via a steep walk. The Cathedral is considered one of the most impressive medieval buildings in Europe. Don't forget to walk along to High Bridge, which dates back to 1160 AD.

The Foss Dyke was long thought to have been constructed by the Romans around 120 AD. Pointers include an inscribed statuette of the god Mars found in it at Torksey, which is now in the British Museum, but there is a lack of consensus among authors writing on the subject.

The first record of it comes from Symeon of Durham, whose Historia Regium notes the following for the year 1121:

"In the same year, king Henry cut a large canal from Torksey to Lincoln, and by causing the River Trent to flow into it, he made it navigable for vessels."

Some take this to mean that the canal did not exist before Henry's construction work. Thus Kevin Leahy writes:

"Even if the Fossdyke had been built by the Romans it needs a high level of maintenance and after a few hundred years of neglect it would have been difficult to find, let alone navigate."

Others, though, consider that Henry I merely scoured out an existing structure; Mark Bennett, writing for the East Midlands Archaeological Research Framework says:

"The Foss Dyke is almost certainly Roman. No quay has been identified at Lincoln as yet although a length of wall suggestive of a quay was uncovered in the 1950s at the site of the Telephone Exchange east of the walled city and north of the Witham."

The canal is about 11 miles (18 km) long. It possibly follows an earlier line of the Trent, which emptied into the Wash in prehistoric times. Together with the 56 miles (90 km) of Car Dyke it formed part an important transport route from Peterborough to York.

It was reputedly used by the Danes when they invaded England and by the Normans to carry stone to build Lincoln Cathedral in the 11th century. Following King Henry I's work discussed above, the canal deteriorated, until by the 17th century it was virtually impassable. Katherine Swynford, who lived in the area, is credited with having organized a protest to repair it, in 1375. King James I transferred ownership to the Corporation of Lincoln.

In 1671, during the reign of Charles II, Lincoln obtained an Act which authorised improvements from Boston to the Trent. Work was carried out on the Fossdyke, but only the first 100 yards (91 m) of the Witham, from Brayford Pool to High Bridge, received attention. The work was carried out by Samuel Fortrey, a man with previous experience of draining the fens. He was required to bear some of the cost himself, in exchange for some of the profits. The work was completed in 1672, and included a navigable sluice or lock at Torksey, which had first been proposed by Simon Hill in 1632. Warehouses and wharves were built at Brayford Pool, but by 1717, passage from Torksey was again difficult. Coal traffic averaged 1,357 tons per year, bound for Lincoln, but tolls were insufficient to finance repairs. The city of Lincoln did not have the expertise to manage the waterway, and so leased it to Richard Ellison in 1741, who had experience with the River Don Navigation. He paid £75 per year for a navigation which generated around £100 in toll receipts. He dredged it to provide 3.5 feet (1.1 m) of depth, and re-opened it in 1744. Two years later, the tolls were £595, and continued to increase. Under his son, the tolls were £2,367 in 1789, while his grandson collected £5,159 in 1811.

Navigation through Lincoln and on to Boston was hampered by the shallow draught available under the medieval High Bridge, just below Brayford Pool. Sir Joseph Banks, when proposing the construction of the Horncastle Canal knew that the problem needed addressing, and William Jessop was commissioned to survey the Witham and the Fossdyke in 1791, with particular reference to the junction between the two. He proposed a bypass to the south of the city, using the Sincil Dyke, or excavating the channel beneath the bridge, although he recognized that this solution was not ideal, due to the narrow width of the bridge hole, and the lack of a towing path through it. However, the city was keen to keep trade within its limits, and improvements to High Bridge, which were completed by 1795, were authorised as part of the Horncastle Canal act of 1792.

Torksey Lock, looking towards the River Trent. Four sets of gates are visible, and a further two sets are situated beyond the bridge.

The Witham Navigation was soon needing repairs, and the commissioners asked John Rennie for advice in 1802. His report, published in 1803, included recommendations to demolish High Bridge so that a waterway 34 feet (10 m) wide could be built under a new bridge, and improvements to the Fossdyke costing £12,260. Neither action was followed. The Fossdyke was difficult to maintain, because much of it ran through sand and quicksand. The situation was more complex, because it had been leased to the Ellisons for three generations, and Richard Ellison III was not keen to spend any money on it. Income from tolls would have more than covered repairs, but there was little that could be done. A challenge to the legality of his lease was considered in the 1820s, but was not thought likely to succeed. He died in 1827, and Humphrey Sibthorp, his niece's husband, who was a proprietor on the River Witham, took over responsibility for it. He asked Isambard Brunel to survey it, and although he did so in 1833, no improvements were made.

Railways arrived in Lincoln in 1848. The Wakefield, Lincoln and Boston Railway had negotiated with the proprietors of the Witham and Fossdyke in 1846, to guarantee them an income by leasing the waterways. Richard Ellison IV had agreed a lease for 894 years, at £9,570 per year, based on the average profit for the previous three years plus 5 per cent. The line was built by the Great Northern Railway, who took over the leases already agreed. The Witham was affected more than the Fossdyke, as the line followed its bank from Lincoln to Boston. The Manchester, Sheffield and Lincolnshire Railway (MSLR) passed through Saxilby to Lincoln a little later. Combined figures for the two waterways showed a drop in goods carried of two-thirds between 1848 and 1868. Cargos of coal and wool were the first to transfer to the railways. However, the MSLR, by then part of the Great Central Railway, built a dock and transhipment warehouse at Brayford in 1897. The Fossdyke carried 75,881 tons in 1905, and an average of 69,611 between 1913 and 1917, most of it general goods and agricultural produce. A series of takeovers and mergers resulted in its ownership changing several times, before it was nationalised, and became the responsibility of the British Waterways Board in 1948.

Although its date of construction is unknown, the London and North Eastern Railway Company built a small pumping station to the west of Torksey lock. It contained a steam-powered beam engine, which was probably made by Davy Brothers of Sheffield, and drove a double-acting bucket pump. It was situated close to the land drainage pumping station, which pumps into the tidal part of the Fossdyke, draining some 13,000 acres (5,300 ha) of low-lying land to the south of Torksey. Its job was to maintain the water levels in the navigation, but it was demolished in 1936, and no traces of it remain. A new pumping station at a similar location was commissioned in 1974. This forms part of the Trent Witham Ancholme transfer scheme. A pumping station at Short Ferry on Barlings Eau pumps water through an 11-mile (18 km) pipeline to Toft Newton reservoir, on the upper reaches of the Ancholme. The water is used to maintain the flow and level of the Ancholme during the summer months and other dry periods. When there is insufficient water in Barlings Eau and the Witham, Torksey pumping station transfers water from the Trent through a short pipeline into Foss Dyke. From there it flows for 10.8 miles (17.4 km) along the waterway to Brayford Pool and so into the Witham, to supplement the water available for pumping.

Information provided by Wikipedia. History of the Foss Dyke .