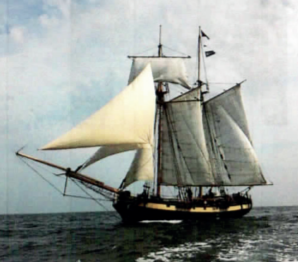 Our guest speaker is Mal Nicholson who will be speaking to us about HMS Pickle and Spider T.

A few words to whet your appetite. Mal is a Lincolnshire Character. His business is restoring classic motorcycles and cars in his workshop on the side of the Sheffield and South Yorkshire Canal. Mal acquired the last Sheffield barge to be built (at South Ferriby)  ‘Spider T’ and restored her to sailing condition,  taking her across the North Sea and up the East Coast. The hold is now a resplendent lounge with leather chesterfields, and an Arga. In December 2013 Mal’s business was wiped out by the infamous East Coast Surge.

With no business, an advert on ebay caught Mal’s eye and he purchased Her Majesty’s Sloop Pickle in Gibraltar. This replica of the Original HMS Pickle, which brought news of Nelson’s death back from Trafalgar, was one of five built in Russia in 2205 for the 200th anniversary Trafalgar celebrations. Mal narrowly avoided disaster bringing her back to blighty, which involved an extensive refit in Portugal. Since returning she has cruised the East and South Coasts, laying alongside her nemesis, HMS Victory, and becoming adopted by the Royal Navy. After a spell in Hull Marina, where she became unwanted following a change in ownership of the marina, she is now safely moored in the fish dock at Grimsby alongside Spider T. It is Mal’s aspiration to make both vessels available for trips and sail training, and to incorporate a maritime centre to allow public access and display the many historic artefacts he has created.

It promises to be a fascinating talk.”