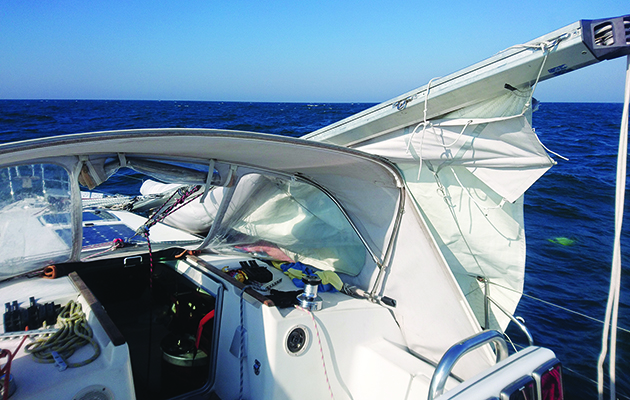 TAGS:BeneteauboatdismastingLearning curveSwedenyacht
Dismasting doesn’t happen very often in summer coastal cruising.When it does, proximity to land and other boats usually means that some external help is at hand.

But the possibility that you lose the rig and have to deal with the ensuing situation alone is always there.

I was sailing Saga, a 30-year-old Beneteau First 36.5, with her owners Thomas and Astrid, from Gotland back to mainland Sweden, a distance of 70 miles.

Her mast and standing rigging had been professionally inspected two years previously, her sails and running rigging were mostly new, and everything appeared sound.

We put in a first reef with a breeze of 14 knots and the second at 17 knots and were making 6.7 knots close-hauled in a relatively lumpy sea with waves around 1-1.5m high. 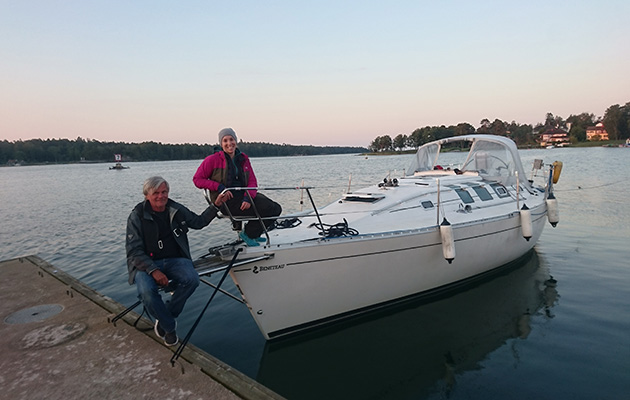 Thomas, Astrid and Saga safe and sound in Nynäshamn, following the dismasting

After sailing six hours – about 40miles – we decided to put in a tack.

As we came through the wind there was an almighty crack.

The mast vanished, the main boom slammed onto the spray-hood over the cockpit, and a second later a look forward revealed only a short section of mast, unstepped from its housing inboard and sheared off outboard, projecting horizontally out over the starboard lifelines.

The other 13.5m (45ft) of the rig hung vertically from the outboard end of this stub, the jagged end of the broken-off mast extrusion vanishing into the sea with each downward roll of the boat.

On the bright side, no one was injured; on the down side, we were outside the range of the excellent Swedish 4G network, and the radio – whose aerial was located, you guessed it, at the top of the mast – was dead.

Should we sit and wait for help arriving on the off chance, or should we try to get ourselves home?

We were not in a shipping lane or on the popular direct course between Visby and Landsort (we had been beating towards our destination).

We had no emergency sender on board and it would take a couple of days before relatives realised we were missing.

We didn’t like the look of the sheared-off section of mast pumping up and down out of the water inches from the boat’s waterline.

And the sea conditions were increasingly uncomfortable.
Read the full story HERE
Posted in Information.